We often receive requests from people for a more "portable" antenna booster option. Many are looking for something that will boost the signal to their wireless device but also blend in. They are looking for an antenna that they can comfortably walk around with. 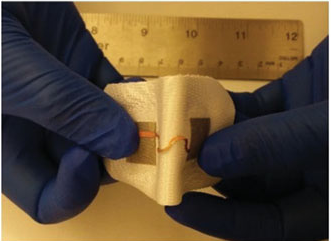 With the growing popularity of wearable devices, stronger portable antennas have come into higher demand. Watch phones, body monitoring systems and other wearable devices could send data over a larger area with better antennas. The challenge is the antenna maintaining its designed frequency when the antenna stretches and bends.

A wearable antenna is in development at the King Abdullah University of Science and Technology (KAUST). It is being developed with the cooperation of the US-based University of Illinois. It will be the first antenna that you can stretch and twist and still maintain it's tuned frequency. This antenna holds the potential for you to wear it comfortably. It could even be stitched into your clothing.

"While research in stretchable electronics has started getting momentum, a flexible antenna that can perform far-field communications and can operate at constant frequency, such that physical shape modulation will not compromise its functionality, is yet to be realized."

You would use such an antenna to transfer data from your wearable device to another device such as a PC. The PC could be in your home or office a distance away. The antenna could also attach to sensors on your body. For example sensors that pick up your body's pulse, temperature and blood pressure. The data is then transmitted to another device for storage and processing later.

The antenna in development is made of polymer backed copper thin film. A stretchable fabric covers the film. An antenna strain test showed that stretching, twisting and crumpling the antenna caused no damage. And, most important, the test demonstrated that the antenna was able to keep its electrical properties.