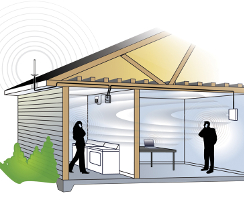 Hansen, of AlternativeWireless.com, a San Antonio-based Wilson Authorized Reseller, had good reason to check out the 4G LTE 700. He uses a Verizon 4G phone, and though the Verizon LTE service outside his house is good, the building’s metal roof inhibited the signal and made 4G coverage inside the home spotty and data speeds slow.

“I had to stand next to a window just to use the Web on my phone,” Hansen said of the slow data rates inside his home.

He resolved to use his house as a test case for the 4G LTE 700, to see if the booster could live up to the claims of faster data speeds made by Wilson.

Then, with the 4G LTE 700 booster powered off, Hansen took baseline data speed readings at three locations inside his home. He used his Samsung Droid Charge 4G phone for the tests and SpeedTest.net Mobile to measure data speeds.

Directly under the inside antenna his Droid Charge was unable to access the Verizon LTE signal. Instead the phone defaulted to the 3G signal, which it uses when no 4G signal is available. Hansen recorded a download rate of 1.8 Mbps and upload rate of 0.999 Mbps.

Moving to a second location 15 feet away from the inside antenna, and again with access only to Verizon 3G signal, he saw a 0.8 Mbps download and 0.9 Mbps upload rate.

Finally, in a third location 30 feet from the inside antenna Hansen got an LTE signal, but data rates were still far below 4G speeds at 1.3 Mbps download and 0.6 Mbps upload.

He then powered on the Wilson 4G LTE 700, turned the adjustable gain dials (one for uplink gain, another for downlink gain) to their highest setting, and took readings again in all three locations to measure the improvement the booster provided.

In test location 1, Hansen now could access Verizon LTE signal rather than the 3G signal he got previously. His data speeds measurements jumped 850 percent to 17.1 Mbps download, and almost 500 percent to 5.9 Mbps upload!

In test location 2 with the booster powered on, he again got 4G LTE signal rather than 3G. This produced speeds of 19.5 Mbps download (over 2,300 percent faster) and 7.1 Mbps upload (almost 700 percent faster).

Clearly in Hansen’s tests the Wilson 4G LTE 700 delivered dramatically faster data transfer speeds than were available without the booster. By providing a strong, reliable LTE signal inside the house, the booster allowed access to 4G speeds.

“There wasn’t that much difference in signal strength over the 3G signal,” he said. “The real difference was being able to get a reliable 4G signal that moves data so much faster.”

Hansen also noted that the increase in data speeds he observed will not be possible in every situation.

“The most important thing is the strength of the outside signal,” he said. “We have a pretty strong Verizon signal outside the building. If you have a strong signal outside, then you can have faster data speeds inside.”