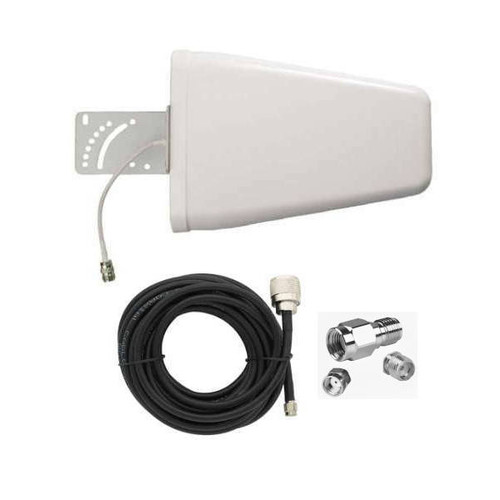 This kit combines a Wilson Wide Band Directional Antenna PLUS a 20 Foot Cable - SMA Male Connector PLUS it add an adapter to convert a RP SMA Female to SMA Female. Works with Cellular devices (such as cameras) that have RP SMA Female Connectors. Also works with 2.4GHz WiFi Devices.

Warning: Lightning protection is recommended for all installations (Wilson Surge Protector 859902). Take extreme care to ensure that neither you nor the antenna comes near any electric power lines.

Wilson's Wide Band Log Periodic Directional Antenna (Wilson Wedge Antenna) will collect the cell tower signal and send it through the cable to an amplifier, hotspot or cellular data card. When your device transmits, the signal is transferred to an amplifier or directly to the antenna and broadcast back to the cell tower.

The Wilson WideBand Antenna includes an adjustable mounting bracket and will accommodate pipe diameters from 1.25 to 2 (pipe not included). Mount the antenna so that there is at least 3 feet of clearance in all directions around it. Position the antenna so that it has the most unobstructed line of sight to the cellular service providers strongest signal. If you are using a wireless amplifier, make sure the antenna is not pointing across your own roof.

The weBoost App might come in handy as it will give you your signal strength reading and direction of nearest service provider tower. Just load the android or Apple app on your mobile device. More weBoost App information.

MSRP:
Contact Us Now: $119.99
Was:
Wilson Directional Antenna + 20 Foot Cable + TS-9 Adapter Connect This Antenna To Your Device That Has A TS-9 Port - Such As Many Hot Spots, Mifi & Other Devices This kit combines a Wilson...

MSRP:
Contact Us Now: $7.99
Was:
Antenna Adapter For The Tactacam Reveal X Camera This adapter enables you connect an antenna with an SMA Male connector to your Tactacam Reveal X camera. The Reveal X has a Reverse Polarity (RP) SMA...

MSRP:
Contact Us Now: $499.99
Was:
weBoost Drive Reach - weBoost Most Powerful, In-Vehicle Cell Signal Booster Yet! The Drive Reach is weBoost’s most powerful, in-vehicle cell phone signal booster yet. With its increased...