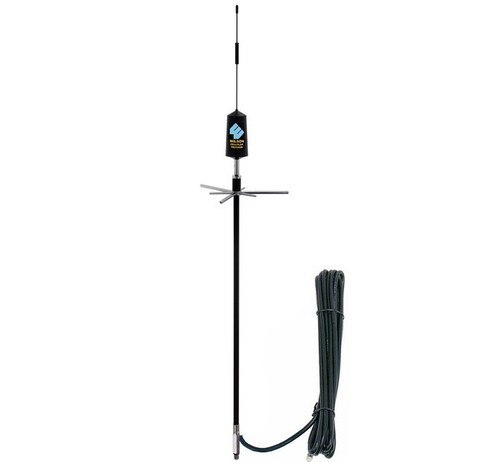 This Wilson Trucker Antenna is no longer available.

The Engineers who created the Wilson Trucker C.B. Antenna have designed a cellular antenna that connects directly to your cellphone with an external antenna adapter. No other manufacturers cellular antenna comes close to the performance of the Wilson Trucker Cellular Antenna, both on 800 and 1900 MHz (Digital or Analog). Up to 90% of cell phone signal on both transmit and receive is absorbed within the vehicle body and the user's head. Wilson solves this problem by channeling all the power from the cellphone to the outside antenna. This results in the Wilson Cellular Trucker Antenna transmitting and receiving over 10 times more signal (10-15 db Gain) than a cellphone used inside the vehicle without an outside antenna.

The Wilson Dual Band Cellular Trucker Antenna was carefully designed to minimize loss and maximize gain on both 800 MHz and 1900 MHz bands. Wilson accomplished this by using a phasing coil and a low loss coaxial phase reversing device that provides high gain on both frequencies. Wilson's innovative design results in high efficiency and low losses and will get the most signal to your cellular phone. Thanks to those innovations and attention to detail, Wilson Electronics has the best performing dual band trucker cell phone antenna available. Trucker Mirror/Pole Mount Antenna Specifications Electrical Properties: