What do I need to get WiFi?

What do I need to get WiFi?

These days, it's easy to get access to a WiFi network on the road. All you need is a wireless network adapter for your laptop. But what if you want wireless network access at home or in your office? Here are some basics.

A wireless network consists of at least:

If you do not have a wireless network in your home, then the first thing you need is a Wireless Access Point or AP. 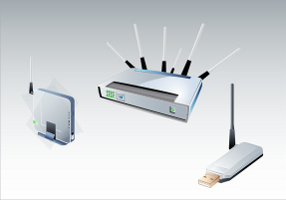 The access point is the hub that ties the wireless network together. If you have heard of a wireless router, that refers to a wired network router that has a wireless access point built into it. When your computer sends any data through the wireless network, it is communicating directly with the Access Point. The Access Point sends the data to the other devices on the network, such as other computers or the internet modem.

If, when traveling with your laptop, you have directed your laptop to search for available networks, it is searching for access points that are ready to connect to client computers. When you find networks, you see a list of SSIDs, which are the names of the wireless networks nearby. If you purchase a new AP, the SSID is set to a default value (such as "MyWLAN"), so you may connect to it without setting anything up. The default SSID is in the user's manual for each AP.

I have a wireless network, now how do I connect my computer?

For your computer to read the wireless transmissions from a network, it needs a Wireless Network Adapter. Many laptops and some desktops come with a low-power (40mW) wireless adapter built in. These will connect up to about 20-30 feet away from an AP, for roaming around a small house or a few rooms in a building.  High-powered units (100-1000mW) will increase wireless connection range by 2x or more.

Once a wireless adapter is installed, you may use the adapter's software to connect to a network within range.

Where is the Antenna during all of this?

Every device that communicates using radio waves through the air needs an antenna. One device may have a built-in antenna that is inside its plastic case. Another has an antenna that sticks out where we can see it. Hidden antennas are convenient and sleek, but protruding antennas usually perform better. Often, the best configuration is a detachable antenna. Being able to detach an antenna allows the use of high-quality wireless antennas that can customize performance, based on the situation.

Detachable antennas usually screw onto an RF connector, similar to a TV cable. The connectors used on WiFi devices are SMA-RP, N-type or TNC-RP. Look for the connector type in the item description when purchasing an AP or WiFi Adapter. Don't worry if the antenna connector does not match the device, as we carry converters to change from one connector type to another.