What is a Yagi Antenna?

What is a Yagi Antenna?

What Is A Yagi Antenna?

The word "Yagi" is the name of one of the Japanese inventors of these directional antennas. The other inventor's name was Uda so in technical circles these are Uda-Yagi antennas in honor of the inventor team. The invention is from the early 1900s.

While there is a multitude of directional antenna designs in use today, the Yagi is the most popular, well known and most seen. Some people call these "beam" antennas, namely CBers and Amateur Radio Operators and cellular.

Note: the rooftop TV antennas seen all over the US are a cousin of the Yagi design but are called Log-Periodic because they are quite different in serving a huge number or width of frequencies.

How Do Yagi Antennas Achieve So Much "Gain"?

Basically they are directing a major or almost all of their signal in just one direction instead of dispersing all around a 360 degree circle. All those single element whips and rods on cars, boats etc are omnidirectional, doing the 360 degree job. Zero (unity), 3 and 5db gain are the typical numbers for those. Usually the taller they are (for a given frequency) the more gain is laid out on the horizon, where it is needed.

This is the common term used when measuring decibels (dB) to determine the effectiveness of an antenna in a given direction or plane. Simply put, it is the measure of the intensified signal where it is wanted or needed because antennas cannot create gain. The antenna is designed to manage the power in the wanted direction and thus reduce it in unwanted directions. 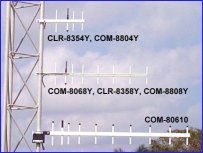 The "Boom" is the long horizontal bar you would see in attached drawings or photos here.

The "Elements" are the small thin rods supported by the boom. These elements are usually vertically positioned, as seen in the pictures. The front of the antenna has the shorter elements and the rear has the longer ones. The difference in element dimension is small compared to those Log-Periodic TV antennas mentioned. Starting from the rear the boom has the reflector then always the "driven" element then from 1 to any number of "directors" usually 1 to 13 or so.

The signal output is off the front end of the boom. The signal "beam" is anywhere from 20 to 90 degrees wide with the longest or most element-ed design having the narrowest width and highest gain or reach.

Where Can I Mount The Antenna?

The available length of your feeder cable may determine your mounting spot and cable length considerations will address later. Otherwise any vertical or horizontal pipe, roof edge, wall, window sill, balcony railing or fence post can be used. Also, inside-attic hidden install is acceptable as long as there is no metal in the roof that signal has to penetrate. Wood and concrete are normally invisible to RF signals but at these frequencies (824-894mHz) gain may be reduced.

Where Do I Point The Antenna?

The front of the antenna has to be directed at the target, the cell site or repeater tower or other user. It is best to use a map and compass and knowledge of target location but usually you can locate the target if it has a signal being sent to you. By simply rotating your Yagi until best signal is found then centering on the estimated location, satisfactory results may be had. Slowly rotate the antenna and stop every 10 degrees. Record signal levels. Note the peak and decline positions and soon a center can be figured out then tighten the mounting bolts. Be sure to stand at least a couple of feet away from the antenna and and to the back or sides. Never in front of the antenna. Your body can greatly alter signal patterns.

What Was That About Cable?

At cellular frequencies of operation, cable can be quite lossy. Signal loss or attenuation happens all along the cable. The rule is, the shorter the better. Many consumer-use Yagi antennas come with 18-22 Feet of RG-58 coaxial with 96% braid shielding. This setup has about a 3.5 dB loss in signal. (16dB Loss/100 Feet/900mHz) If your installation requires a longer feed line you must upgrade to a double shield RG-58 (11dB loss/100FT) or a double shield RG-8X for a 7.7dB loss /100Ft). All of the above is fine up to a 50 foot run. From 50-100 feet, RG-8 or 9913-Equivalent double shield (3.8dB loss/100Ft) type must be used but it's harder to use and much more expensive than other cables mentioned here.

The antenna needs to be mounted as high and in the clear as possible. But there is a point at which increasing height to gain 1dB can cause an extra 3dB in cable losses. So good thinking must be utilized when deciding when more height is needed and how much longer the cable will be. On the other hand, if excess cable length is present, either remove it or run a long path to the antenna, never coil or fold up the cable.

These, like most antennas, are made of aluminum, a great conductor of electric power besides radio frequency energy. You can be instantly killed if the antenna or support structure being worked with touches an electric power line. Never even think of installing an antenna during rain or wet conditions.

Finally, don't stand less than 5 feet in front of the transmitting antenna when using a regular 3 watt phone. Don't install the antenna where the signal has to cross where people will be walking in front of or touch your antenna. While radiation dangers at low power are not proven, don't take chances with RF emissions.